Forgiveness Around the Fire: Patty Grant Brings Grief and Healing to the Sacred Fire Community 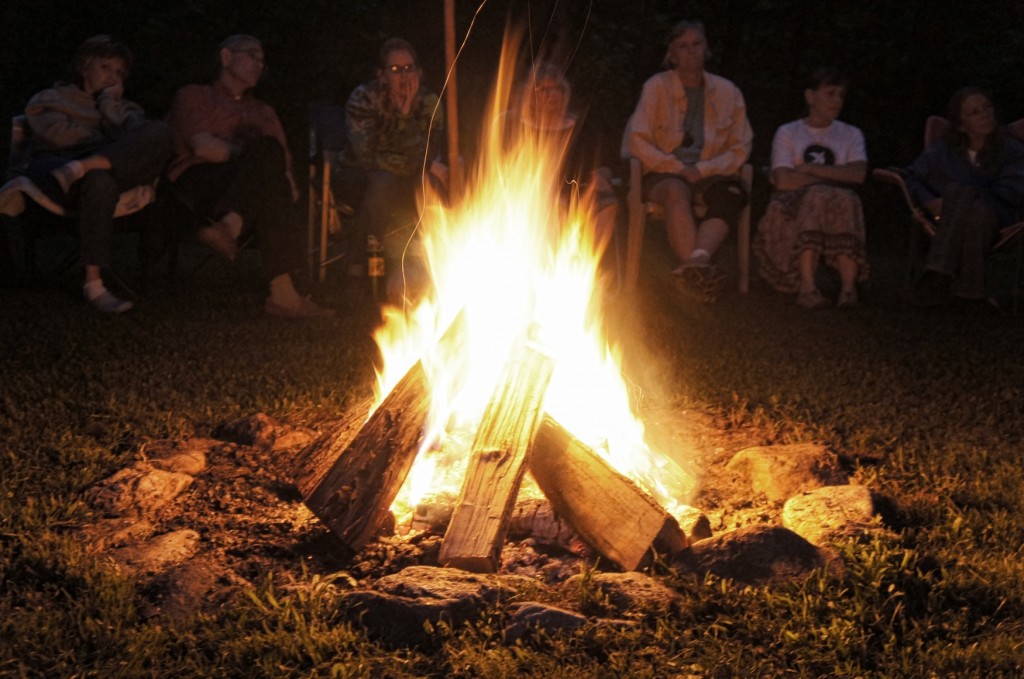 On Saturday, July 21, I attended a special fire offered by the Sacred Fire Community and our Maggie Valley, NC, USA hamlet featuring the story of the recent work of the Cherokee on moving toward forgiveness of centuries of oppression by the white dominant culture. Patty Grant, member of the Eastern Band of the Cherokee Indians as well as a founding member of the Cherokee Healing and Wellness Coalition, was the special guest. I took notes during the fire, and, with her permission and the collaboration of Cindy Fogle, our Firekeeper who organized this important event, I wrote an article about the event, Patty’s talk and the sharing afterward.

Cindy added a few details, and we sent it off to Patty, inviting her to correct our ignorance and white perspective. The article that appears here is a collaboration between the three of us. Cindy and I are grateful for Patty’s patience and grace and her assistance, which has allowed us not only to share this experience, but to do it in a way that the telling of it reflects her voice and perspective. —Erin Everett

“We are now about to take our leave and kind farewell to our native land, the country that the Great Spirit gave our Fathers, that gave us birth… It is with sorrow we are forced to quit the scenes of our childhood… We bid farewell to it and all we hold dear.” —Charles Hicks, Tsalagi (Cherokee) Vice Chief on the Trail of Tears, August 4, 1838

A delicious potluck, friendly faces of new friends and old, and a warm fire to follow.

On the night of July 21, at first it might have looked like a familiar Sacred Fire Community fire for the people who showed up at the Maggie Valley, NC, USA home and hearth of Firekeeper Cindy Fogle. But there was something very different going on: for one thing, 33 people — three times the usual number than on a normal fire night — showed up for this gathering. This was a special fire with an important focus. Patty Grant, member of the Eastern Band of the Cherokee Indians as well as a founding member of the Cherokee Healing and Wellness Coalition, was there to tell a hard story of violence, fear, hatred and injustice, of grief and loss, and of a forgiveness that only comes with true courage, the power of ceremony, and open-hearted sharing.

Patty was there to talk about the Cherokee Journey to Forgiveness and the historical grief and trauma inflicted by our European ancestors for several generations. The trauma occurred on many levels psychologically, emotionally, spiritually and mentally. She touched on a few of the historical events that resulted in much of the trauma and that still plague many of the members even today. She shared that 17,000 Cherokees were rounded up and placed in stockades until they were forced to march over twelve hundred miles to Oklahoma Territory, in an act of cultural abuse known to us as the Trail of Tears. Several generations were forced to attend the boarding schools developed by the federal government where all native children who attended were “forced to be white”: to adopt white values and reject everything that made them native, causing many of them to lose their identity, language, cultural beliefs and spiritual values.

“The Cherokee have been here (in the Southeastern United States) for over 10,000 years and our original homeland covered 40,000 square miles in approximately eight states. We are sitting on Cherokee land.”

By the 1800s, their land base was reduced to 56,000 square acres, known today as the Qualla Boundary.

The circle was totally silent, hanging on her every word, as she shared parts of her own story. She grew up with a mother (full blood Cherokee) and a father (Lakota) who died before she was born. She is the youngest of eight children, and she never knew her father. She described growing up with a mother who went to the boarding school as a young child. Although Patty described her mother as an extraordinary woman, she did not perceive her that way until Patty herself became a parent and entered recovery. She described her mother as angry and abusive, and said she was not affectionate or nurturing. She remembers a childhood spent in poverty.

Patty said children who went to the boarding schools came out with not knowing how to parent. She talked about her own alcoholism and getting into recovery at the age of 35, a year before her mother died. Patty described her mother as being wounded like many Native Americans of that and previous generations. Both of Patty’s parents attended boarding schools, where they were severely punished for speaking their native language or practicing anything related to their cultural ways and beliefs. Many of the Cherokee have spoken of the “bone room,” a dark cellar room where children were placed for punishment. Patty said that many children died while at the boarding schools, and their parents were never contacted or informed, leaving the parents to believe their children completed school and moved out into the dominant society to live their lives.

Instead of avoiding the dark history of our country and thinking instead of more pleasant things, the people attending this fire showed up with courage to listen. In that circle, many knew or just learned that it was our ancestors who looked on as the Cherokee were forced off their original homeland onto the Trail of Tears and into the death and abuse of the camps and boarding schools.

Before the infamous Trail, men, women and children were rounded up and held in stockades where many starved, froze to death or became very sick from dysentery and other diseases. There were over 17,000 Cherokees marched to Oklahoma, and four to five thousand perished along the way. We heard of unspeakable atrocities committed at the Indian Boarding Schools: some of the children’s fingers were chopped off because they were caught speaking their language, and many of the students were sexually, physically, emotionally and mentally abused by the staff and often by the older students while at the boarding school.

Patty talked about the problem today of sexual trafficking of Native women in Minnesota and other neighboring states, where it is said that sexual abuse begins as early as four years of age. Patty shared that she believes that many Native Americans who have been abused become abusers in many forms. The abuse is passed down from generation to generation in the form of physical, emotional, spiritual, and emotional violence and addiction.

Patty is part of the Cherokee Healing and Wellness Coalition, and their goal is to reduce substance abuse and other social problems on the Boundary by offering trainings, conferences, workshops and annual community days that promote and support the Cherokee’s seven core values: spirituality, harmony, education, sense of place, honoring the past, strong character, and sense of humor. They believe it will help break the cycle of addiction, violence and abuse in the lives of those who attend.

“By sharing painful stories and challenging the lies we have adopted as our truths — either told by the dominant society or by our own people who adopted them in order to survive — the fire is lit. Until people open their hearts and begin a dialogue of a truth that is beginning to be told both with the Tsalagi (Cherokee) and people who are non-Cherokee, the fire will continue to be dim. In order for the sacred fire to burn its brightest and its fullest, a true dialogue must begin between all peoples so healing can occur.”

She also tells us, ”Effects from the traumatic events that we experienced in the past 300 to 400 years are very present today. If you really listen to our conversation, we talk about it daily. We know it on some level, but deny that it is affecting what we do, where we go and how we think. It is a lie, and we live with it as if it were our truth. We are encouraged to talk about the unspeakable.”

One step on the path to forgiveness and healing has been the Cherokee Journey to Forgiveness. In May 2012, Patty and 22 Cherokee and their invited guests chartered a bus to retrace the northern route of the Trail of Tears from Oklahoma back to the original homelands of the Cherokee in North Carolina.

“We stopped at significant places on the trail where our ancestors camped along the Trail of Tears. We did talking circles, smudged and prayed for our ancestors. During that time, we expressed strong emotions, attempting to understand what they must have felt during that time. We collected soil to symbolically bring the spirits of our ancestors back home to Cherokee, North Carolina.”

As Patty’s story came to a close, Cindy asked everyone in the circle to share if they felt moved to do so. Many shared their tears, wailing, anger, awe, regret, and surprise that this even happened because it wasn’t taught in the classroom. They shared with compassion and hope for the future with passion and honesty. And in the end, a new understanding and a new relationship was forged. It was a beginning of a candid conversation between the descendants of the abusers and the descendants of the abused. 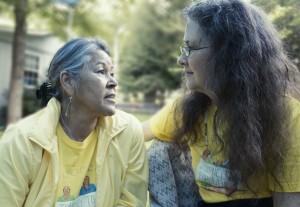 It is the beginning of a relationship built on truth, courage, compassion, honesty and a new understanding of our country’s history. We are encouraged to develop the ability to listen to hard and painful things and to express genuine remorse for what has happened.

Patty said at the end,

“We are connected with our pain and hurt, and until we are willing and ready to explore it, we cannot heal. If we do not have the courage to look at our own pain, it is difficult to see the pain others are carrying. Until we do this, we only stand near the fire. To heal, we must stand in it.”

Find out more about Patty Grant and her group, the Cherokee Healing and Wellness Coalition, at http://www.cherokeehealingcoalition.org

Cindy Fogle is the Sacred Fire Community’s Firekeeper in Maggie Valley, NC, USA and can be contacted at cindyfogle (at) me.com

Erin Everett is the Speaker for the Sacred Fire Community and can be contacted at speaker (at) old.sacredfirecommunity.org

What you can do:

– Visit whitebison.org for more information about the Boarding School Apology Initiative and how you may participate, and for information on asking President Obama to apologize to the Cherokee and native people for cultural oppression.

– Contact your local Firekeeper  to look into initiating a special fire or event in your area about a topic that is important to you. Don’t have a local hamlet?  Contact Annie King, Sacred Fire Community Fire Chief, about bringing a fire to your area.

– Be courageous and show up for difficult conversations about apology and forgiveness with people who feel like enemies in your own life.

– Look at history books, the news and media and day-to-day conversations in a new light. Are there ways you could speak out to support the sacredness of people, cultures and the living world instead of standing back and assuming your voice won’t make a difference? As Patty Grant showed us all, showing up with our listening and our speaking can bring great positive change.

– Speaking of which, has the Sacred Fire Community pushed your buttons? Push back by making your voice heard: old.sacredfirecommunity.org/pulse.

Help our children by donating your time!

Join us in the Flow of Deep Community!