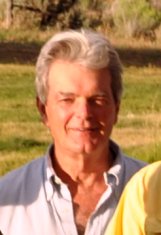 Dan Sprinkles has lived around the world, including Taiwan, Greece, up and down both coasts of the U.S., and in Hawaii and Alaska. After graduating with an honors degree in Electrical Engineering, Dan was commissioned as a naval officer and was selected for nuclear training, serving five years as a naval officer on two nuclear submarines in clandestine, highly classified submerged operations. Dan went on to receive an MBA from Harvard Business School, and spent over twenty years as a corporate executive and consultant.

At age 50, Dan began a new phase of his life and was initiated as a weather-working shaman (granicero) in the Nahua tradition and as a traditional healer (mara’akame) in the Huichol tradition. He serves as a Board member and shaman-in-residence for Blue Deer, a retreat center and home for ancient wisdom in the New York Catskills. He and his partner, Annie Eagan, serve as Firekeepers under the auspices of the Sacred Fire Community. Dan is the facilitator of the Sacred Fire Community Lifeways initiation for young men, Sacred Awakening.