A story that was perhaps H.C. Anderson’s very first tale was discovered in the bottom of a storage box in October 2012 near the Danish writer’s home city.  Experts have been studying it ever since, and think it was written by the revered fairy tale writer in the 1820s.

We hope you enjoy his wonderful fire wisdom that is just as helpful for our times as it was centuries ago. What does it spark in you?

To Mme Bunkeflod from her devoted H.C. Andersen

It sizzled and fizzled as the flames fired the cauldron.. it was the Tallow Candle’s cradle – and out of the warm cradle came a flawless candle; solid, shining white and slim it was formed in a way that made everyone who saw it believe that it was a promise of a bright and radiant future – promises that everyone who looked on believed it would really want to keep and fulfil.

The sheep – a fine little sheep – was the candle’s mother, and the melting pot its father. Its mother had given it a shiny white body and an inkling about life, but from its father it had been given a craving for the flaming fire that would eventually go through its marrow and bone and shine for it in life.

That’s how it was born and had grown; and with the best and brightest anticipation cast itself into existence. There it met so many, many strange creations that it became involved with, wanting to learn about life – and perhaps find the place where it would best fit in. But it had too much faith in the world that only cared about itself, and not at all about the Tallow Candle. A world that failed to understand the value of the candle, and thus tried to use it for its own benefit, holding the candle wrongly; black fingers leaving bigger and bigger blemishes on its pristine white innocence which eventually faded away, completely covered by the dirt of a surrounding world that had come much too close; much closer than the candle could endure, as it had been unable to tell grime from purity – although it remained pristine and unspoiled inside.

False friends found they could not reach its inner self and angrily cast the candle away as useless.

The filthy outer shell kept all the good away – scared as they were to be tainted with grime and blemishes – and they stayed away.

So there was the poor Tallow Candle, solitary and left alone, at a loss at what to do. Rejected by the good, it now realised it had only been a tool to further the wicked. It felt so unbelievably unhappy, because it had spent its life to no good end – in fact it had perhaps sullied the better parts of its surroundings. It just could not determine why it had been created or where it belonged; why it had been put on this earth – perhaps to end up ruining itself and others.

More and more, and deeper and deeper, it contemplated – but the more it considered itself, the more despondent it became, finding nothing good, no real substance for itself, no real goal for the existence it had been given at its birth. As if the grimy cape had also covered its eyes.

But then it met a little flame, a tinder box. It knew the candle better than the Tallow Candle knew itself. The tinder box had such a clear view – straight through the outer shell – and inside it found so much good. It came closer and there was bright expectation in the candle – it lit and its heart melted.

Out burst the flame, like the triumphant torch of a blissful wedding. Light burst out bright and clear all around, bathing the way forward with light for its surroundings – its true friends – who were now able to seek truth in the glow of the candle.

The body too was strong enough to give sustenance to the fiery flame. One drop upon another, like the seeds of a new life, trickled round and chubby down the candle, covering the old grime with their bodies.

They were not just the bodily, but also the spiritual issue of the marriage.

And the Tallow Candle had found its right place in life – and shown that it was a real candle, and went on to shine for many a year, pleasing itself and the other creations around it.

Do you have a story to tell about sacredness and fire? Share it. 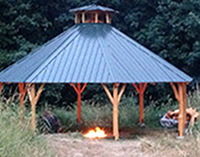 A Date with Mr. Hot…and Beyond sitting in the stillness