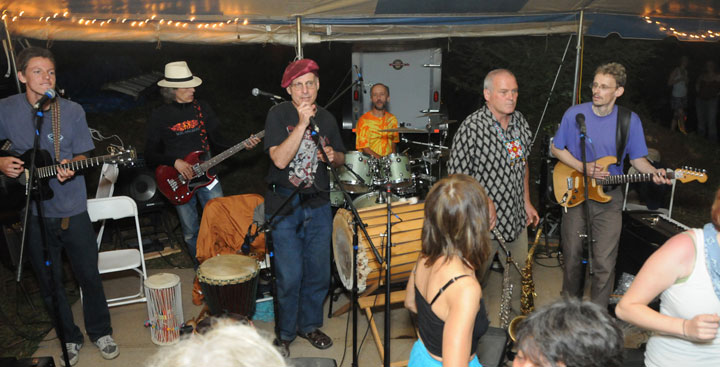 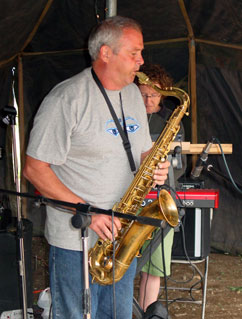 Scott Chaitanya Sheerin: Band leader: Flutes, saxophones, percussion and vocals. Scott is a wind player and shamanic apprentice in the Huichol tradition. Trained as an acupuncturist and Plant Spirit Medicine practitioner, he has a deep interest in healing and the spiritual nature of music. Scott offers music as medicine at Healing Camps around the country. His playing is alive to the energy of fire–joy, connection and transformation. An adventurous improvisor, Scott is always looking for the Divine in the music in the present moment. http://scottsheerin.bandcamp.com/album/flow 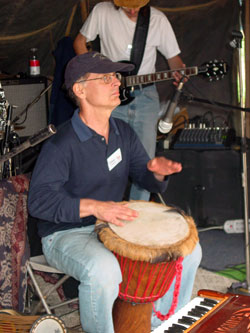 Eliot Cowan: Percussion, keyboards, harmonium, tamboura and vocals. Eliot is a shaman in the tradition of the Huichol Indians — a people who know the world is a song. 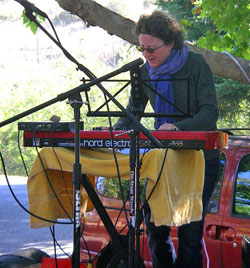 percussion and vocals. As a pianist and composer, Myra currently leads or co-leads several ensembles including her latest project, Snowy Egret, a quintet performing music inspired by Uruguayan writer Eduardo Galeano; and the collective,Trio M, whose new release, The Guest House, is out on Enja/Yellowbird (Feb 2012).  She also performs solo and duo concerts with a host of great improvisers, and has recorded and performed with composer-saxophonist Henry Threadgill, conductionist Butch Morris, Art Ensemble of Chicago multi-reedist Joseph Jarman and the late violinist, Leroy Jenkins. Since 1991, Myra has appeared on more than 30 recordings, including 20 as a leader or co-leader.  She is a professor of Improvisational Practices at the University of California, Berkeley and is the recipient of the 2012 Alpert Award in the Arts for Music.  “Melford can be rhythmic, romantic, stoic, wry, and lusty but most of all daring – all in one tune.” (Stuart Nicholson, The London Observer). http://myramelford.com/ 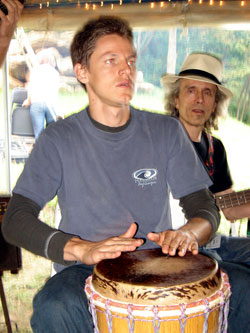 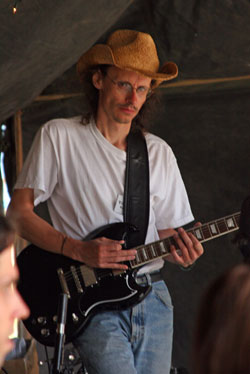 Tilman Reitzle: Lead guitar, loops, percussion and vocals. Tilman has flown under the radar of music scenes as diverse as Berlin’s techno and Hoboken and Manhattan’s independent music scenes. His 1995 release Sonic Abandon was a duet with Bon Lozaga, guitarist of the jazz-rock ensemble Gong. In 2005, he  collaborated with Berlin drummer Dave Rogers on the free-jazz, art-rock explosion titled Return to Whatever. Along with Rob Norris, he is also member of the world-beat group OmU. Ever the musical chameleon, Tilman has performed with David Hykes of the Harmonic Choir and shared stages in London and Berlin with one of his heroes, legendary Can vocalist Damo Suzuki. 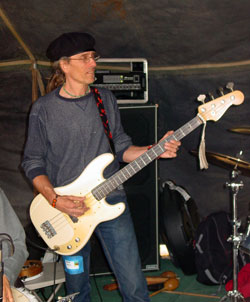 Rob Norris: Bass guitar, percussion and vocals. Rob is best known as the bassist for The Bongos–the founding fathers of the ’80’s Hoboken indie-music scene. He also plays with East Of Venus, The Wizards, Richard Barone & Friends, Tulula!, OmU (who twice toured in Cuba), Bibi Farber, Amy Poux, Jim Metzner and Joan Henry. Over the years Rob has shared the stage with Donovan, Damo Suzuki (Can), The B-52’s, Garth Hudson, Steve Holley (Wings), Lenny Kaye (Patti Smith Group) and Moby–as well as members of R.E.M., The Feelies, Throbbing Gristle, Television, Osibisa and The Velvet Underground. He has played in hundreds of venues from San Francisco to New York to London to Berlin and appears on dozens of recordings. Rob’s solo CD “Morning Becomes Electric” is available at all online digital outlets. Rob has also been a holistic healer for over twenty-five  years, with a private practice in New York’s Hudson Valley. http://www.myspace.com/robBASSman 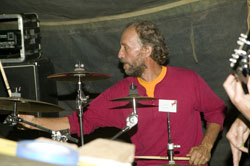 Steve Kemble: Drums, percussion and vocals. Based in Asheville NC, Steve has performed and recorded with many musical groups over the years, and is fluent in various musical genres such as rock, blues, jazz, funk, salsa, reggae, soca, soukous and zydeco. He loves to blend these influences and sensibilities into Blue Paradox’s diverse forever-being-born-anew repertoire to help create music that is exquisitely alive in the moment, and that gets your feet movin’! When he’s not making music, Steve likes to play in the dirt, leading workshops in various natural building techniques using mud and straw, as well as other sustainable technologies like solar design, permaculture and rainwater harvesting. http://mudstrawlove.com/

The Sacred Fire Community: A community of 300,000 worldwide…

Ritaka – The Energy of Youth