On January 8, weather.com posted a hugely sensationalist apocalypse graphic, along with the headline, “Are you ready for the next Apocalypse?” and this article . What is the Sacred Fire Community’s way of looking at climate change and upheaval?

Here’s the video clip that accompanied the weather.com article:

I invited Huichol Marakame, healer and writer Jonathan Merritt to respond to this and the tone of many other articles that flooded major media during the transition from the past era to the new one. —Editor

Sometimes it is vital to do nothing—Huichol Proverb

Many years ago, we were sitting at a teaching fire led by Eliot Cowan, one of the elders of the Sacred Fire Community. A young man became incensed that Eliot’s advice for dealing with the current changes, with global warming and the extinction of species, was to sit by the fire and listen, to try to hear the voice of the heart before engaging in action. The young man shouted angrily and ran off into the night. We never saw him again.

In the recent presidential election, neither major party candidate said a word about global climate change. It wasn’t until Hurricane Sandy made a late blustery entrance and scoured the Eastern Seaboard that the most important issue of our time entered the general conversation. It was as if Ms. Sandy cast a powerfully destructive vote. Could it have been mere coincidence that she arrived at that particular time and place?

We are sitting, according to the Maya and many other traditions, in the dawn of a New Sun, a new age of connectedness where people are awakening to realize their dependence on each other and on the living world. We are living, in a sense, in a time of apocalypse. Apocalypse comes from the Greek meaning “to uncover or reveal.” So we are living in the time of revelation.

But what is being revealed? Clearly, if we look at the vast floods and deadening droughts, the earthquakes and tsunamis, the forest fires and tornado swarms that sweep with increasing regularity across the lands, the great elemental forces are calling to us to wake up, to pay attention, to look at how we are living and how that affects everything around us. And, beyond that, we are being shown that we, as humans, are not in control, that there are much greater beings and forces at play in the world. We are being shown that our anthropocentric and egoist world view must change. 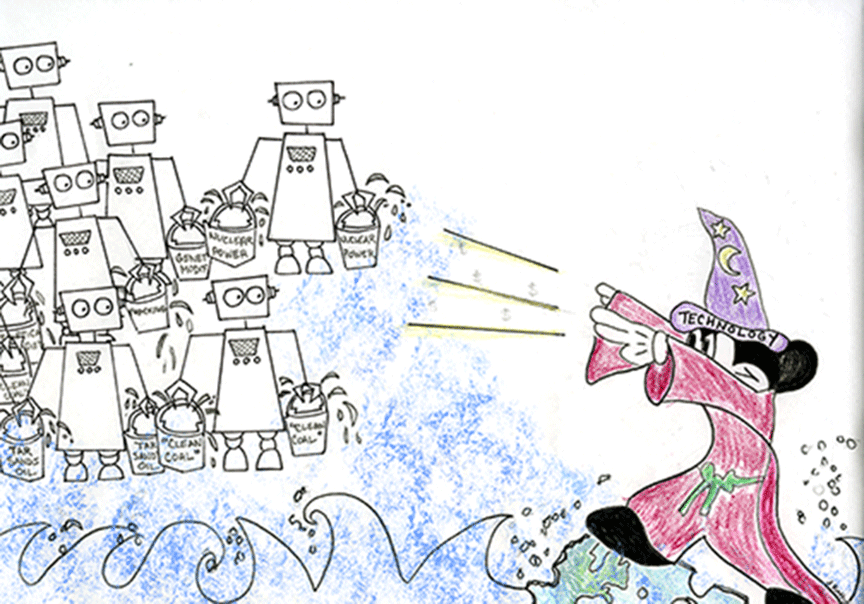 The technologists are like the sorcerer’s apprentice in Disney’s Fantasia. Driven primarily by the profit motive, the technologists operate from a limited perspective that seeks to maintain the status quo at all costs. And the costs and consequences are spinning wildly out of control. (Cartoon: Joanne Rothstein)

So what are we to do? How can a perspective that is deeply rooted in every aspect of our culture be transformed? And what can we do in the face of impending environmental catastrophe?

The dominant media message is to keep consuming as much as possible and trust that technological solutions will be found. Unfortunately, the promoted solutions—such as nuclear power or tar sands oil or “clean coal”—either come with a myriad of dangers or are purely delusional. The technologists are like the sorcerer’s apprentice in Disney’s Fantasia. Driven primarily by the profit motive, the technologists operate from a limited perspective that seeks to maintain the status quo at all costs. And the costs and consequences are spinning wildly out of control.

Countering that is the idea that we need to gather supplies and hunker down with weapons to protect ourselves when everything falls apart. The fallacy in the myth of the rugged individualist is that no one can gather enough supplies and weapons to protect him or herself against the forces of nature. If the Great Plains becomes a desert, no bag of beans will be big enough. No rifle will hinder a hurricane.

Both these approaches come from fear-based perspectives—that nature is an enemy that must be dominated and exploited; and that it’s everyone for him or herself. But there must be some way to move beyond fear, to engage each other and the world with creativity, with openness and flexibility.

According to Eliot Cowan, one of our Sacred Fire Community elders, and also according to many other wise teachers, the first step is to slow down, to sit by the fire and listen. Listen to the fire, to the wind, to the birds and insects, the animals and the trees, to the falling and flowing waters, to the people who are naturally drawn to the fire. Listen to your own heart. Be patient. Your innate wisdom, which lives in your heart and connects you to the wisdom of the world, will be warmed and awakened by the fire. Follow your heart’s direction. It will lead you to others whose hearts have been awakened. Together you will discover that the world is not just alive, but that it is constantly relating to you, nurturing and supporting you in every way, asking only that you acknowledge the validity of its livingness, that you engage it with gratitude and respect.

From that perspective of awareness, gratitude and respect—and with the continued guidance of wise teachers whose voices are gradually becoming more audible through the din of civilization—you will discover the fundamental truth that you are not alone, but part of an infinitely diverse community engaged in a magnificent adventure, the adventure of transformation. Clearly, there will be difficulties. Much will be lost. But there are always difficulties; there is always loss. Clearly, technologies will have to change. Clearly, it’s a good idea to stock some supplies, not just for yourself, but to share with your community when things are scarce. When you let go of fear and listen to your heart, you will discover that true abundance comes from living in relationship with each other and the living world, taking only what you need, discovering and giving back the gifts you were born to give. You will be filled with joy. You will be filled with wonder.

The Maya tell us that this is a time to celebrate. This New Dawn, this Apocalypse, is the growing revelation that we are all deeply connected, dependent on and obligated to each other. By acknowledging the sacred and interconnected nature of all life, by gathering in community and re-establishing our relationship with the living world, we will end the isolation of modern culture and build lives of meaning and purpose. We will be able to move with creativity, openness and flexibility when catastrophe strikes. And in this way, the people will live. 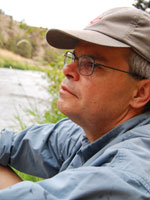 Jonathan Merritt is a marakame, an initiated traditional healer in the lineage of the Huichol people of Mexico. The founding editor, and currently a contributing editor for Sacred Fire magazine, Jonathan keeps a Sacred Fire Community fire in Portland, Oregon.

Do you stand for the sacred and interconnected nature of all life? Take our Stand for Sacredness.

Read more about our Community fires and the dance of deep community.

What does this article bring up for you? Please share your heart by commenting on this post below.

Affirm your connection to the cycles of life